My dear friend Pauline has always said you should play tourist in your hometown. And she’s right. Six years of living in Cleveland and we’re still discovering new things. We love to spend weekends exploring new parks, markets, restaurants and places. But a few weeks ago, we were able to have a fun overnight tourist adventure in Uptown thanks to the InterContinental Suites and Cleveland Botanical Gardens. See, they had a little contest on FB and Twitter and I won! So the weekend after Christmas we secretly packed a bag, put the kids in the car and told them we were going on adventure. 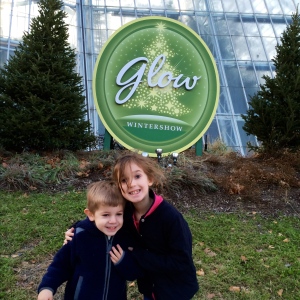 Our first stop on this unseasonably warm Saturday was CBG for the Glow – their awesome annual holiday show. We took advantage of the daylight and explored the outdoor gardens. The kids ran off some energy on the paths before heading in to check out the array of gingerbread houses, indoor camping, dozens of Christmas trees and more. We’re frequent visitors of CBG and we love the Glow exhibit! 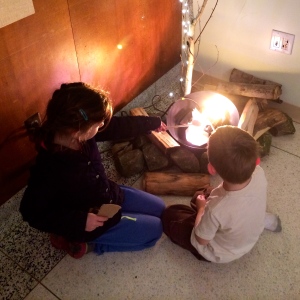 After the sun started to set we got back in the car and said “I don’t feel like going home. Do you? It would be fun to not go home tonight!” The kids were a bit surprised. Well, Matilda was flabbergasted: “What!? We HAVE to go home! We can’t sleep in the car!”. After a discussion about how cold the car would be overnight we ended up at ABC Tavern for some dinner. Since it was only 5:00 we were basically the only ones in there. The kids loved all the open space, the juke box, and the bowling game.

Cheers to adventure in our own town!

After dinner we walked over to one of the newest Mitchell’s for our favorite dessert. Then strolled over to Constantino‘s for a few provisions. 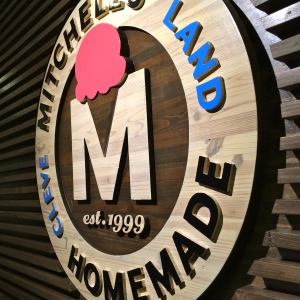 By this point Matilda was nearly beside herself. We had been out for almost 4 hours and Mark and I kept talking about stating uptown all night but she was adamant about going home. She wanted a bed to sleep in! She couldn’t sleep in the car! So when we pulled up outside of the InterContinental Suites Hotel and Mark said “why don’t we just stay here tonight?” she was aghast: “I don’t have any books to read! I need my pajamas!” I smiled and as I pulled the packed bag out of the trunk and her eyes grew wide. “Are we really staying here?” she asked over and over.

Their Director of Sales & Marketing, who set up our stay, put us in an suite with an adjoining room for the kids since they were not at full capacity that night. I knew InterContinental’s were nice (I’ve stayed in other properties) but this was almost too much! Mark and I were SHOCKED at our set-up. A full suite with living room, bed room and kitchenette PLUS an adjoining standard room (it was huge) with a king bed and other kitchenette. The best part is that we took up a full corner of the hall and had no neighbors we had to worry about disturbing.

The kids took no time to get settled in. They were on the bed, watching cartoons (we don’t have cable at home, so the TV as a luxury to them) and drawing on the notepads within minutes.

Soon they had discovered the bathrobes. Once they were wrapped up Madman kept saying “I’m a king!” And Matilda just sighed, leaned back on the couch and said “this is the life” as she put her slippered feet up.

They were thrilled to cozy up in bed and watch a movie. Something they only get to do on vacation!

We all slept well, given that we were spread out across a huge area. The next morning after a delicious breakfast at C2 (also part of the prize package), we did some more serious lounging in the room before checkout. Matilda even took a bath, if only to wrap up in the robe and try out the phone in the bathroom.

Nearly a month later and the kids are still talking about our surprise overnight adventure. I’m so grateful to InterContinental Suites and Cleveland Botanical Gardens for providing such a memorable weekend. I can’t wait to do it again!

Have you ever done an overnight adventure in your town? Or just a surprise trip? We may do another one sooner than the kids think… (like tomorrow night! Shhh! It’s a secret!)

Yes, I know Christmas was 23 days ago and it FEELS like it was 2 months ago. But whatever… I want to document what the kids got and what we did over our break. So let’s pretend I have my stuff together and this posted about 22 days ago.

We did our family holiday the weekend before Christmas so the kids basically were showered with gifts for several days. Matilda got a k’nex roller coaster from my parents. The box says age 7+ but there is NO WAY this thing would have been assembled without the help of my 16 year old nephew. It took him, a few adults and several hours for it to be assembled. The parts are many and tiny – even worse then LEGO. However it is very, very cool when assembled and running. Madman got a Tinker Toy set. Madman had played with our old wooden tinker toys when we visited my parents this fall so we knew this would be a hit. I’ve got to say this is the knock-out hit of the year. Both Matilda and Madman have been playing with them non-stop since they were opened.

My sister’s family got Matilda a set of learn to draw books, HeadBandz and gave Matthew the Imaginext SuperMan Set. From my brother Matilda go Mario Kart while Madman got more Imaginext super hero stuff and a cool rocket.

On Christmas eve they get to open presents from our dear friend “Aunt” Lindsay. She set Matilda up with great Kirsten accessories – mittens (with matching ones for Matilda), a mini doll for Kirsten and stockings for both stuffed with old-fashioned peppermint sticks and maple candy. Matilda was thrilled she got “pioneer” candy. Madman got a claw grabber which he went crazy over – “I am a robot” he would say as he tormented his sister with the claw. He also got a really great robot book.

Matilda and Madman also get to exchange gifts on Christmas Eve… Matilda picked out a Spider-Man set for Madman, and he got her the My Little Pony Equestria Girls Twilight Sparkle Doll*. Both were thrilled.

This year Matilda’s big gift from Santa was a new bike. It was time for her to move up to a larger frame. After doing some research Santa decided that Giant was the way to go. But Santa is cheap and there was no way he was buying a $250 kids bike. Luckily Santa and Craigslist are BFFs and he found a Giant MTX 125 for less than half price. The “boys” and “girls” MTX are the exact same bike but in different colors. So Santa, being practical, got a graphite gray bike since it will eventually be passed down to Madman. Santa thinks ahead like that. He also put some fun reflective decals in Matilda’s stocking so she could decorate it herself. Result: happy girl on her new bike… 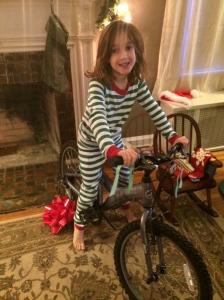 Madman’s big gift from Santa was a crazy Hot Wheels track**, which Santa smartly got during a pre-Thanksgiving sale. Some additional cars in the stocking made this a big hit. That is after Mark put it all together. Santa should think more about assembly next year.

Rounding out the Santa gifts… Matilda got a skirt, a mini pillow pet, and the Rainbow Dash Equestria Girl. In her stocking she found lip balm and a set of Magic Treehouse books, in addition to the decals mentioned above. Madman got the movie Planes, a mini pillow pet, a few books, and those hot wheels in his stocking.

From us Matilda got a Nurf Rebelle Bow (she LOVES it), Super Mario Brothers for the Wii and more books.

We gave Madman a remote control car, clothes (which he literally threw over this shoulder, A Christmas Story-style), the Sneaky Snacky Squirrel Game (you guys – this game is awesome for preschoolers!), a Tegu set (I found a great deal on Woot!) and more books.

Together they got an overnight trip to Maui Sands (thanks Living Social deals!) which we’ll do in February.

Whew! My kids are pretty spoiled! Luckily we did a decent cleaning out of toys before Christmas and donated some older things.

Adding this in just for myself so I remember things in the future… Christmas morning I had prepared cinnamon rolls using the Pioneer Woman’s recipe (I sent half of them to my sister’s house with my parents). Verdict: the icing was WAY too sweet. Will try it again with different icing. Also posting this photo here to record the tree and mantle: 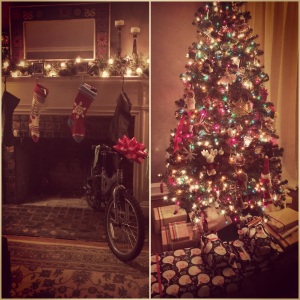 What was the big gift in your house this year? Can you believe Christmas was less than a month ago?

* Equestria Girls are a terrifying new spin-off of My Little Pony in which the ponies become these weird human-pony hybrids who attend high school… or something. Basically it’s an attempt to keep the little girls who loved MLP interested in the brand as they get older. Matilda has bought into it hook, line and sinker.

**Pay no attention to any of these prices because holy crap, Amazon prizing is crazy. I did most of my shopping before Thanksgiving and the prices were WAY LOWER then. Also, links are not affiliate, just there as an FYI.