Disclosure: I was invited to the #BloggingatCP blogger day at Cedar Point and my family entered the park for free.  As always, my thoughts are 100% my own. I only share events that my family plans to attend or has attended in the past, so I know they are worth the visit. See bottom of post for some Father’s Day offers.

Was Memorial Day weekend really 3 weeks ago already? How did that happen? Maybe it’s taken this long for me to recover from a weekend of pure fun. It all started Friday night when the ClassyChaos crew rolled into their old stomping grounds of NE Ohio. We hosted a little get-together at our house and as always this group of 7 kids got along like BFFs and laughed well into the night. 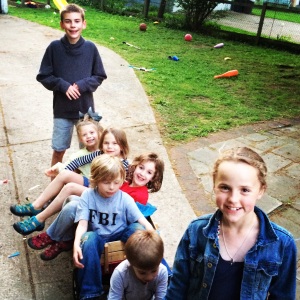 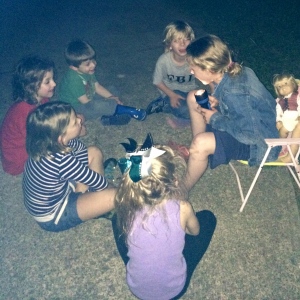 After a later-than-usual night, Saturday dawned with perfect blue skies and 70-degree temps which meant the #BloggingatCP blogger day at Cedar Point would be amazing. We arrived shortly after the park opened and quickly met up with TeamSawyer who we caught on the brand new Pipe Scream. 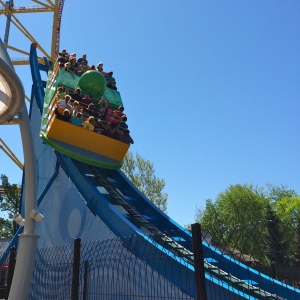 After that the kids scrambled over the other new ride for 2014, the Lake Erie Eagles. 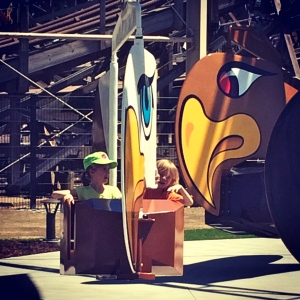 Since we were right there, we hung out in Camp Snoopy for a bit so the kids could do a few rides. Since it was the beginning of the season and a beautiful holiday weekend, lines were longer than I’m used to… but the kids had buddies to chat with no one got cranky. Before we knew it, it was time to eat so we headed to the #BloggingatCP lunch where we met up again with Pauline and her fam. We ate a delicious lunch while looking out over the lake. This reminded me of all the times as a kid that we’d pack a cooler with lunch and eat a picnic and eat in the pavilion at the front of the park. That’s one way to save a few bucks. Or you can get the new CP all-day dining plan which lets you get food every 90 minutes throughout the whole day – what a sweet deal for an always-hungry teenager!

After lunch the older kids took charge and declared it time to ride the water rides. Shout out to both Jeff and Jonathan who took the kids on Shoot the Rapids. Jonathan was the hero of the day when he agreed to take one for the team and ride Thunder Canyon, too. This ride gives you a 50/50 chance of getting completely soaked. You can probably guess what happened to Jon. 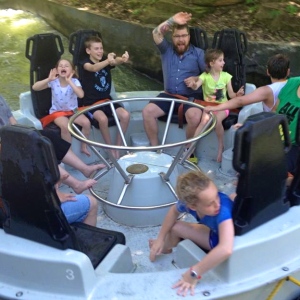 About 30 seconds before going under a huge waterfall. Photo by Pauline.

After that the kids took some time to visit the animals in the petting zoo (I had NO IDEA Cedar Point had a petting zoo!) And ride some of the smaller rides. 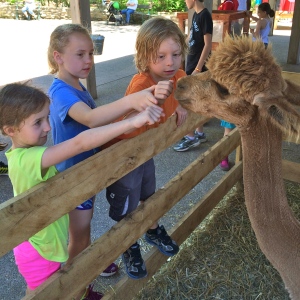 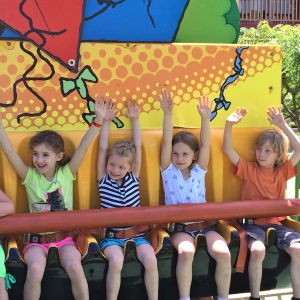 By this time it was around 4 PM and Madman hadn’t ridden a single ride. He was more than happy to just hang out in his stroller and watch it all. So we decided to check out Dinosaurs Alive which has 40  life-sized animatronic dinosaurs. The area where the dinos are is the where the Paddlewheel boat used to be. If you remember the Paddlewheel you’ll remember the groan-worthy jokes the captain used to make. I’m happy to say that along with all kinds of paleontological education, the lame jokes still exist. 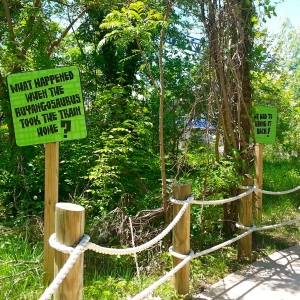 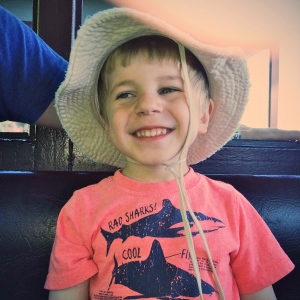 The C.P. & L.E. Railroad was the only thing he would ride – but he was happy

It was a wonderful day filled with friends, fun and lots of laughs. Memories were made for all 7 kids and the grown-ups, too! We can’t wait to head back to “the Point” later this summer. 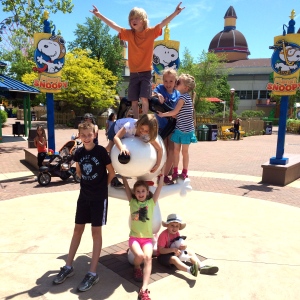 Cedar Point is celebrating all fathers this Sunday, June 15, with great money-saving offers:

On Father’s Day, all Season Passholders can bring their dad (or a friend) to Cedar Point for just $19.99. Also this Sunday, when you buy one Meal Deal for just $13.99 plus tax, dad enjoys his meal for free (limit one free meal per group). Dads also get free admission to Dinosaurs Alive this Sunday!

All guests can still take advantage of the H2O offer where they can purchase a one-day Cedar Point admission ticket now through Sunday, June 15 and receive a FREE Soak City ticket! The Cedar Point one-day ticket for this offer is $39.99, a savings of $20 off the gate price and must be used by Sunday, June 15, 2014. For more details, log on to cedarpoint.com

It started last night when Pauline posted it on FB and asked for thoughts. Then today I saw it all over my twitter feed. It’s an article on Salon.com called The day I left my son in the car by Kim Brooks. The article is very long but extremely well-written – it’s worth your time.

An article she mentions is also worth your read: The Overprotected Kid, by Hanna Rosin. If you haven’t read them both please go and read them, then come back.

Edited to add these other links:

This step-by-step story about a mom who is investigated by CPS for allowing her 6 year old walk alone in their neighborhood.

This interesting article by law professor David Pimentel which says among other things: “Of particular concern is how the trend toward overprotective parenting is reinforced by legal standards.”

As for me, it was around last year at this time that we allowed Matilda to walk to school on her own. She was at the end of kindergarten, school is just under a mile away and there are 4 crossing guards on the route. After a practice walk or two we let her go, hearts in our throats the entire time. And we got raised eyebrows over our decision. Weren’t we worried? What if something happens? It’s a residential route, full of other (older) kids walking and riding their bikes and yet I felt judged because we let our 6 year old walk.

In fact, just today today Matilda and another 1st grader neighbor walked to school together. I saw another mom and her 1st grader leaving to walk and I suggested he just join the girls “no, I feel safer if I go with him!” was her reply. Everyone has their own reasons, but even in a safe and pretty tight-knit community that fear is still there.

And now I’ll transition to the “did-our-parents-really-let-us-do-that” game that Ms. Brooks mentions in her article. I played around with google maps today and learned that from 1st grade on I walked a half a mile to school every day – my older brother and I walked with some neighbors. I’m pretty sure we walked home, too. I know when I was older I was a latch-key kid (my mom was a teacher at my school, so she got home a bit after I did). In middle school the walk was closer to a mile. In the summer we’d sometimes walk or ride bikes about 2 miles to the pool – which was on a pretty busy road with no sidewalks. I’d walk to soccer practice at the park about .5 mile up the hill.

All the kids in my neighborhood spent countless hours in the woods and ravine behind our houses. We built a city of forts, caught crayfish and built damns. We swung on vines and hunted for wildflowers. In the winter we’d drag our sleds to an awesome hill on the other side of the woods and spend hours sledding and building ramps to see who could get the most air. I don’t think anyone ever broke a bone. I have no idea who owned the land, but us kids were allowed to roam free through the woods.

that red mark was my house, the woods were our domain. So many great memories spent in those trees.

There are stories of my brother and his friends “trying to find the end of the road” on their bikes, which was nearly 6 miles away. I remember a few times in middle school being allowed to walk to Friendly’s over a mile away, so I could get ice cream with friends. Summer nights were spent playing in packs until long after sundown. We’d have epic games of “ghost in the graveyard” that spanned several blocks.

I do wish my kids could have that kind of freedom. And they are still so young, perhaps they will. Part of the reason why they won’t is just location. Looking back now, the location of my childhood house was ideal. It was a neighborhood full of families and our houses backed up to a large wooded area. There is nothing like that were we live now. Yes, there are parks and streams and places to explore nearby, but they aren’t places you can build a fort or pick wildflowers. And while our immediate neighborhood has sidewalks and is easy to navigate, the pool and ice cream and even the library require crossing major 4-lane roads in heavy traffic.

But the biggest issue is this fear of leaving kids alone to explore and learn and be independent and then being judged, or worse – arrested  – for it. It’s not necessarily actual danger most people are worried about. It’s the fear of being judged, of being labeled a bad parent.

I just saw a parent on FB talking about a great volunteer program for 14-16 year olds which will be run by the city this summer… “it’s from 9-3 but there is after-care available!” she said. Because we live in a world that makes us fee like 14-16 year olds need a babysitter after 3 pm.

I’m not sure the solution. What do you think?