Pizza night is a sacred tradition in our house. We used to order delivery, but got tired of the mediocre offerings in our area. Then, a few years ago we discovered the bliss of wood-fired pizza and made a weekly trek to one our favorite local spots: Citizen Pie – best pie and the best people – great for when we just want a mind-blowingly delicious pizza and nothing else, Bigga – another unreal pizza, for when we have time for a drive and/or want more the of the full restaurant experience, or Vero – fantastic pies for when we don’t feel like leaving our neighborhood.

But then I got laid off from my job and eating out got cut from the budget. So, homemade pizzas became our new Saturday night tradition. I make enough dough so that all four of us can add exactly the toppings we want. Me being me, I started on a quest to find the best dough and that’s what I want to share with you.

I started with Annie’s Eats Perfect Homemade Pizza Dough. This is a solid dough, it can be made the day you want pizza, and it handles easily. You can make it ahead and freeze the dough balls which is helpful. I’ve made it a few times with decent success, and I would make it again if I wanted pizza within a few hours. But the crust lacked something… I think we were missing some of the chew and bubbles of a wood-fired pizza. Now, I know I’ve never going to get close to a fired pizza in my oven, but I was looking for something more.

I moved on to Jim Lahey’s No-Knead Pizza Dough, using the Serious Eats notes and video as a guide. This dough was better – it had more oomph, it was bubbly and crisp, but it was a HUGE pain to shape. I made this three times and I struggled each time with the shaping, often ending up with one of the 4 dough balls in the trash after too many failed shaping attempts. It would just get too thin in the center and rip, no matter how I rested or babied it.

After I gave up on the Lahey dough, I searched out a dough on Kitchn and ended up with their thin crust recipe. I tried it both ways – baking it the day it was made after letting it double, and letting it rest overnight and baking it about 24 hours after it was mixed. It was a dependable dough, much like the Annie’s Eats version. I wasn’t too difficult to work with  and shaping was easy. But, again, it just lacked something. I was good but not WOW.

So, back to the internet I went and this time I searched King Arthur Flour’s site for recipes. It was there I found their riff on Lahey’s recipe – Artisan No-Knead Dough and, almost more importantly the accompanying post with photos. I doubled the recipe so I would have four dough balls and let it sit for about 20 hours before doing the stretch and fold to redistribute the yeast. And, based on the step-by-step post and recipe comments, I was generous with the flour and the handling of the dough. After the 2nd short rise shaping the dough was a dream. I have a gas oven so I couldn’t bake it with the broiler like she suggests, but it didn’t matter. It was perfect! 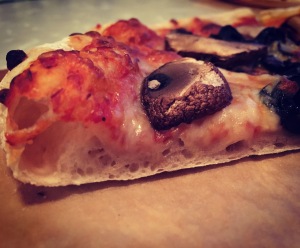 The dough was crisp and bubbly, it had a great chew and perfect flavor. She says you can let it do a slow rise in the refrigerator after the initial 24-hour rise. I hope to try that next week as it seems a 3-4 day rise would just up the flavor ante.  After several attempts, I think I have found my One True Pizza Dough. It’s not that dreamy wood-fired pizza that I can get at a pizza place, but it’s good enough that I can’t wait for pizza night.