Oh what a weekend…

It started out as usual with our summer Saturday ritual of heading to Shaker Square for breakfast at the Farmer’s Market. We get most of our meat, eggs and cheese at the market in the summers, along with produce. The first local strawberries were the excitement of the day and consumed quickly. The kids were also thrilled that Donut Lab was there and chowed down on freshly made donuts loaded with powdered sugar. 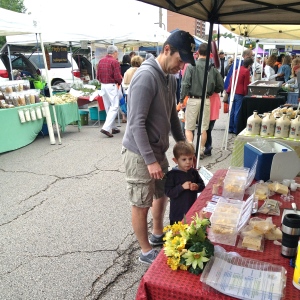 Then Matilda and I headed to a graduation party on the far west side of town. The honoree is someone I’ve known for at least 16 years…I babysat for her when she was just 2 years old and now she’s heading to my alma mater. To make me feel even older, one of the guests was a girl I coached in soccer while I was a college student. She was 9 when I coached her, she now has her masters degree and is working at a nearby university! Oh, how old I feel!

The party was at Huntington Beach and while the weather wasn’t the best, the beach was sunny and warm enough for some fun. Huntington is one of the best beaches in the area (side note: I’m so thrilled that the Metroparks is taking over the management of six lakefront parks. Such fantastic news for everyone!) so Matilda played with the other kids while I quickly found a handful of pretty beach glass. 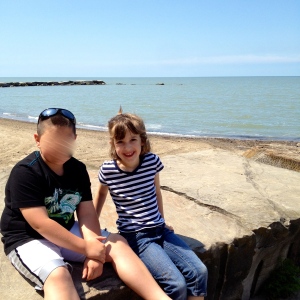 Sunday was the big day of the weekend and something that Matilda had been looking forward to for 2 weeks: her date with Mark and me. While we often take the kids out for one-on-one time it’s rare that one kid gets to spend time with the two of us. Matilda had earned an outing and this was her choice. So we got a sitter for Madman and headed out on our adventure. She, of course, picked Noodlecat for her lunch so we started off with some ramen and steam bun and ended with a delicious push-up.

From there we explored the town – checking out the film set, driving through the Flats to see all the bridges, ending up in Ohio City. I wanted to walk around to try to find the iconic spot where so many people get photos taken with the skyline as a background. We had no luck (although, thanks to Ashley, next time I know where to go) but had fun walking around and being goofy. 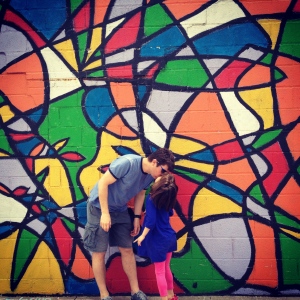 After posing in front of the mural above we checked out the Ohio City Farm and walked around for a bit. It’s so neat to see the farm there, right in the heart of the city and neighborhood, doing so much good for so many people. Hopefully next time we’re back the farm stand will be open.

Before we got to the car to head home we popped in the Glass Bubble Project to look around. Greeted by a friendly chicken and the nicest artists you’d ever meet, we watched as they started work on a new piece. Matilda can’t wait to go back, but only when “it’s winter so I don’t get sweaty”. It would be so fun for her and Mark to take a class there together!

We had a really great time, hanging out with our almost-first-grader, even though there were several times I felt anxious, like I was forgetting something. Not having Madman around was odd and it seems as if a piece of us was missing. But, Matilda talked about her date all night – how her dad always opened her door for her and took care of her.

Sunday evening, as Mark started cooking up some burgers, a girl on our street asked if Matilda could come play in their sprinkler. Even thought it was dinner time we let her go – I’ve never seen her get into a bathing suit so fast! She played while Mark cooked and Madman, Mark and I had dinner. Of course, we couldn’t keep him away from the fun so he got fully soaked in his clothes. Exactly how a summer evening should be!

How was your weekend?

2 thoughts on “Weekend Recap: A Date with our Girl Edition”